Looking at the development of the disease statistics of the past decades the enhancing rate of cancer disease and cancer deaths attracts attention, despite the exorbitantly increased financial expenditure for diagnosis and therapy (Big appliances, intensive medicine, etc.). In the last years no significant improvements could be achieved in this area, whereby the applied therapeutical methods are of limited efficiency. Among the other cancer kinds particularly breast cancer is advancing. Secondary manifestations like metastases and local recurrences due to protracting cancer cells as a result of diagnostic interventions mean a death sentence for patients with mamma carcinoma.

A new way of thinking must, thus, prevail in the future of cancer research and treatment. New disguise and treatment methods should enhance the healing rate of the cancer disease. Modern cryosurgery - a particularly gentle operation technique - experiences nowadays an international attention and dissemination. Good results can be proven through long-standing practical experience and numerous international publications. Thereby it has been shown that a successful employment of this method can only be reached through the development of effective medical-technical appliances. The existing new concept of a multimodal oncology demonstrates how modern, cryosurgical technology for diagnosis, prevention and treatment of cancer could be developed and produced.

Cryo-, freeze- or cold-surgery is the operative cutting of tissue or the targeted destruction of pathological tissue by induced cold necroses at temperatures down to –196°C. Tumors are usually not excised but shock-frozen. In these cases vacuum-isolated cryoinstruments (cryoprobes, cryoscalpels, cryoclamps, cryoneedles) are used. These instruments are cooled to -170°C to -190°C by the evaporation of liquid nitrogen.

In the last 32 years, Univ.-Prof. Nikolai N. Korpan, MD, PhD, Professor of Surgery, and his colleagues together in co-operation with other international scientific institutions have developed and refined new cryosurgical techniques for operative procedures in patients with liver and pancreas tumors, breast cancer, lymph node metastases, and recurrent skin cancer.

Cryosurgery is established in medical practice both as a single technique as well as supplementary to other oncological treatments. The development of the cryocautery (on the Cooper principle), which makes the destruction of large areas of tissue by extreme hypothermia possible, was the technical prerequisite for a cryosurgical method applicable in general surgery. However, the reliable destruction of tumors requires the use of high-performance devices.

Numerous theoretical and experimental studies in vitro and in vivo have been carried out to understand the action of low temperatures on tissue. It has been determined that the processes of ice crystallization are here of primary importance. Current opinion holds that one of the most important elements contributing to the action of subzero cold is intracellular ice formation, which damages the delicate cell structures.  Also important in cryoactivity is the formation of extracellular ice, which is followed by cell and tissue dehydration as well as protein denaturation and rupture of the cell membranes. But the major effect on cell damage and cell destruction in cryoactivity is exerted by the speed of freezing and of thawing of the tissue.

The macroscopic picture resulting from the influence of cold on different organs is almost always identical. At first one notices a mild hyperemia. This is followed by a hint of a change in color of the tissue to livid, after which a snow-white area of solid ice builds around the cryoprobe, which expands as the temperature sinks and the effect of the action of cold increases. Then the ice formation decelerates and finally ceases at –196°C. After thawing, the tissue has regained its original color and consistency. In the hours immediately following the area of focus swells up with edema, and after 3-4 days a completely necrosed focus with a discolored gray surface has formed.

Several days later the process of regeneration begins with the sloughing off of the necrotic tissue. After about 4 weeks the deep necrotic crater is entirely replaced by course granulation tissue.

Microscopically the picture is similar. Total cell dissociation with interstitial bleeding can be seen – a hemorrhagic infarction immediately followed by the formation of an unstructured, homogeneous mass, i.e., a coagulation necrosis. With the sloughing off of the necrotic mass, a seam of fibroblasts appears in the border foci that initiates regeneration absent of leucocytic infiltration (aseptic necroses). Finally, a hypocellular stoma rich in connective tissue fibers forms.

Under the electron microscope, swelling of the mitochondria, fragmentation of the plasma membranes, and thickening of the nuclei can be seen.

Already in the works of Hippocrat, Galen, Celsus and Ibn Sina numerous indications to the treatment of various diseases through warmth deduction can be found, as in cases of haemostasis, analgesia and at feverish states and inflammations. The modern cryosurgery leans on the theoretical, clinical and experimental experiences since 1963. However, because of lacking technical-apparative prerequisites no dissemination could take place. A successful use of this method - particularly for various cancer types - is only possible through the development of efficient medical-technical appliances.

The key points of the modern cryosurgery concept are:

The most important application fields are as follows:

Contraindications: are not known at this point in time.

The modern day of cryosurgery of the present consists of achieving efficiency and effective modality through good, uncomplicated surgical results and a high curative rate (treatment rate) as well as high life quality of the operated patients.

On the basis of own long-standing theoretical, experimental and clinical research, experience and knowledge in the field of modern cryosurgery a new generation of highly efficient appliances under the market name "FreezeForce1" is intended to be developed, thus enabling cryosurgery to an international breakthrough.

The Latest Developments in Cryosurgery

The worldwide demand for modern cryosurgery equipment is currently estimated from 10000 to 12.000 units globally.

Technical Data of the own developed and patented device

"FreezeForce1"
(in comparison with the most famous cryosurgical devices)

The keys to success in this business are: 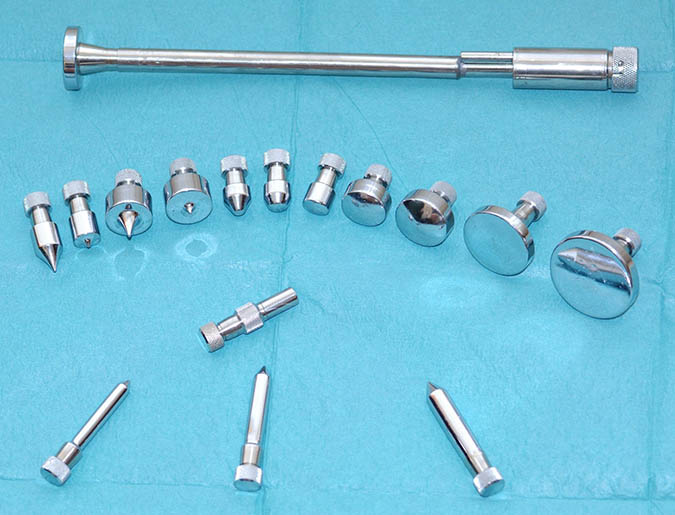 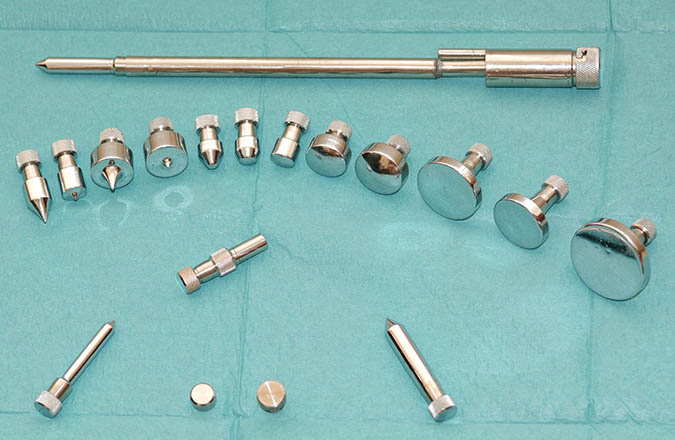 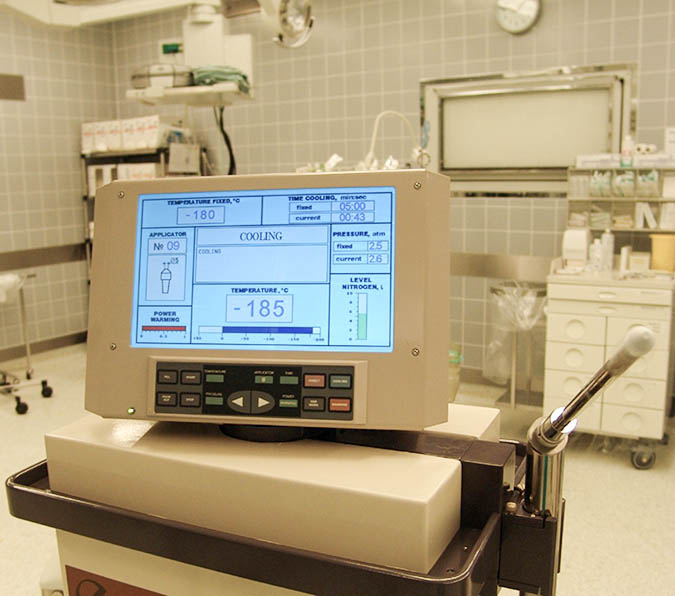 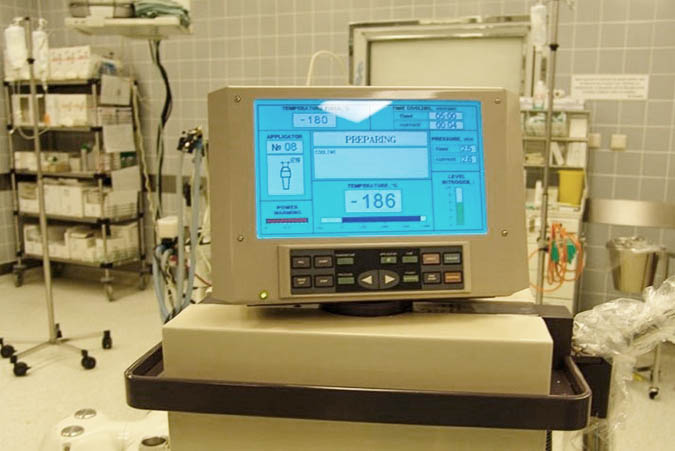 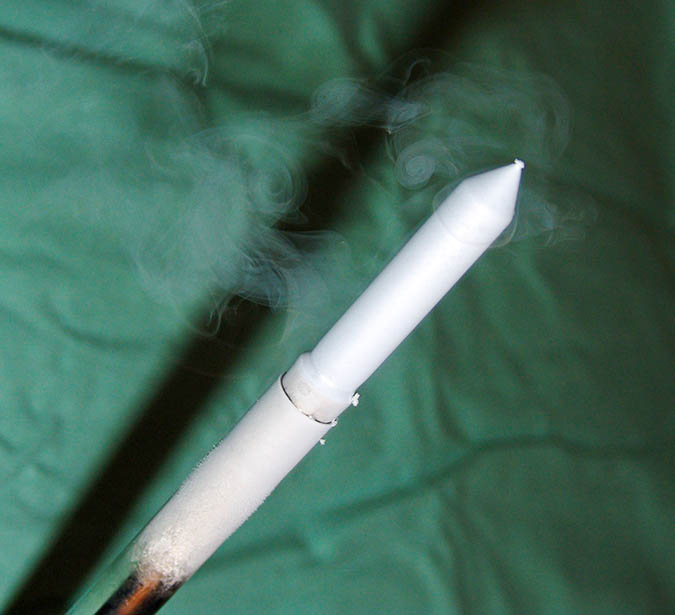